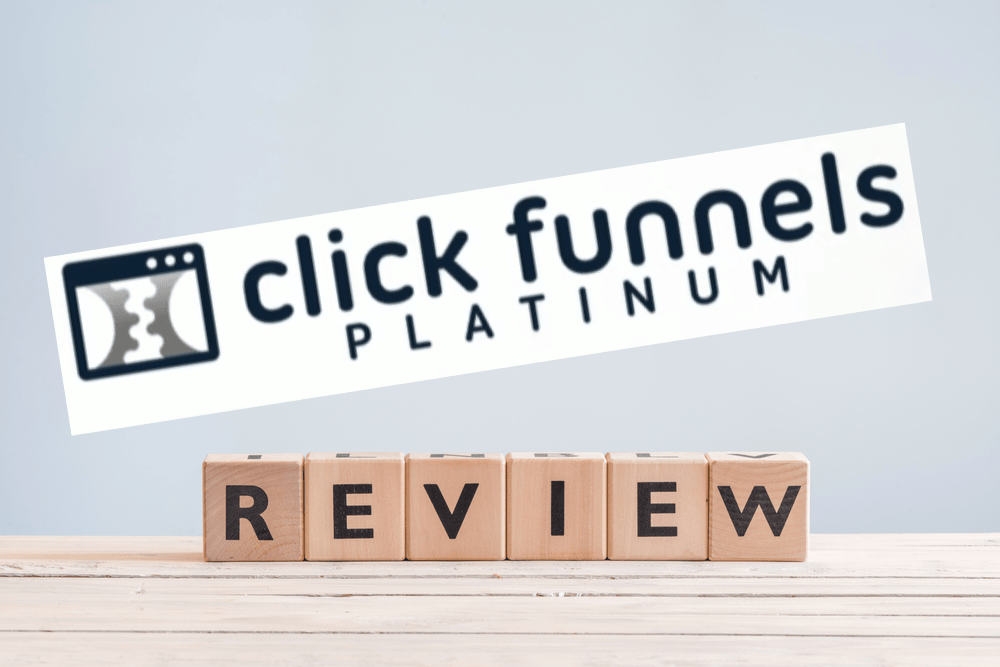 ClickFunnels Platinum Review — Is it Worth It

If you’re reading this ClickFunnels Platinum Review, then you’re probably looking to sign up for the latter and would like to make sure that you get your money’s worth.

Maybe you’re new to ClickFunnels or upgrading from the basic plan? In any case, it would be prudent to hold off on deciding until you get a chance to learn what it has to offer.

After all, signing up for a Platinum account with ClickFunnels isn’t going to be cheap.

It’s no secret that ClickFunnels is one of the most expensive marketing platforms on the Internet. Even their standard account costs $97 per month, which is a lot more than most other premium marketing tools are charging.

For that amount of money, most marketers can’t help but wonder if they’re better off spending their money somewhere else.

In this ClickFunnels Platinum Review, we’ll take a good look at what the marketing platform has to offer and everything that it comes with. Only then can you decide if it is worth spending a sizeable percentage of your marketing budget. Join us as we go over the following:

ClickFunnels Platinum — What Is It?

It goes without saying that you shouldn’t sign up for a ClickFunnels Platinum account without knowing what it is that you’re getting into. For starters, Platinum is a rebrand of ClickFunnels’ old Etison Suite plan. Russell Brunson (founder and CEO) announced the change in September 2019 as part of ClickFunnels’ 5th anniversary.

Users who’ve already signed up for the old Etison plan will be automatically upgraded to Platinum and pricing will remain the same. Of course, There’s more to ClickFunnels Platinum than just a simple name change. You get access to the same features stated under the Etison plan (unlimited sales and landing pages, unlimited funnels, priority customer support, etc.) plus a few more:

Now even the basic ClickFunnels plan is ticketed as a complete online marketing solution that offers all the tools and automation features needed to get your sales funnel going. Having said that, you might be wondering if there’s a need for the above-mentioned features at all. Let us delve deeper into this ClickFunnels Platinum Review by taking a good look at what each one of those features has to offer.

There are limitations on what you can do with the Standard ClickFunnels account. For one thing, you can only build up to 20 funnels and 100 pages. This is no longer the case when you upgrade or sign up for a Platinum account. With the latter, you can create as many sales funnels and landing pages as you want.

One of the few tools available only to ClickFunnels Platinum accounts is a feature called “Follow-up Funnels”. As the name implies, it’s a system that you can use to re-connect with leads even after they’ve left your sales funnel. It accomplishes this by creating an automated plan for how and when to touch base with leads via email messenger.

As you can see above, you can map out an entire sequence for following up with leads similar to their visual workflow builder. For example, you can set up the feature in such a way that your campaign automatically sends an email message two days after leaving your sales funnel.

The message can be personalized depending on which stage your prospect was on. Perhaps your lead was reading about a specific product or feature before dropping off? In this case, your sales funnel can automatically send a follow-up message with an offer to help or provide more information about said product or service. In any case, follow-up funnels can be a powerful tool for maxing out conversions by recouping leads that would have otherwise, been lost to you forever.

Another feature that is well worth mentioning in this ClickFunnels Platinum Review is a tool called “Backpack Affiliates”. With the latter, users can set up and manage their own affiliate program. You can leverage the expertise of other marketers in promoting your products or services without having to spend more of your marketing budget. You only pay a commission for every lead that affiliates bring in that results in a sale.

Russell Brunson describes FunnelFlix as the Netflix of sales funnel building (or web marketing in general). ClickFunnels Platinum members get access to hundreds of videos on how to make money over the Internet.

Most of the videos are of Russell Brunson himself and how marketers can maximize the use of their Platinum account. That said, there are videos from other marketing and self-help gurus like Tony Robbins and Jay Abraham.

One good thing about FunnelFlix is that it’s regularly being updated with new videos from marketing experts around the world. Hence Platinum members can always expect to watch and learn something new from their monthly recurring subscription.

ClickFunnels currently has an official Facebook group that’s open to all users. As of April 2020, that group has more than 242,000 members. What’s strange is that ClickFunnels only has about 95,000 active and paying users around the world. This means that more than half of those members don’t use ClickFunnels and have no idea whatever it is that they’re talking about. That’s not a good place to be asking for any advice or to collect insights on how to improve your campaign.

It was evident that ClickFunnels Platinum members need a place to connect and interact with other users who are as invested as they are in their marketing campaign. That’s precisely what the Funnel Hackers forum is for!

With Funnel Hackers, you can ask help from other Platinum users, share tips and strategies, and connect with like-minded people. Most marketing experts would agree that you just can’t put a price on that.

Last but not least is a weekly peer review through a training program that ClickFunnels call Virtual Hackathons. In these hands-on sessions, Platinum members learn how to build different types of sales funnels to suit specific marketing needs. A virtual coach will be available to guide you every step of the way.

How much does it cost?

A Platinum subscription with ClickFunnels will set you back $297 per month. Now that’s a significant amount of money and can easily dissuade most marketers. However, if you were to look at it objectively, the price is more than reasonable.

As American business magnate Warren Buffet used to say — “The best investment that you can make is an investment in yourself”.  If you were to spend that $297 and learn something that can make you thousands of dollars, how many $297s would you be willing to pay? That’s the “food for thought” we’d like to leave behind as we conclude this ClickFunnels Platinum Review.

So you’re keen on ClickFunnels but looking for a sweet deal?

You can sign up to Funnel Builder Secrets which gives you 6 or 12 months of ClickFunnels Platinum and also a bunch of added bonuses.

Another option that’s even better value is the Funnel Hacks program.

As part of Funnel Hacks you get 6 months of ClickFunnels Platinum as well as some added bonuses.

With Funnel Hacks you get 6 months of ClickFunnels Platinum for $997 a month which works out to $166 a month.

Again you need to pre-commit for the 6 months and pay up front to get the discount.

Conclusion — Is ClickFunnels Platinum for you?

So Is ClickFunnels Platinum worth its high price of admission? Well, that depends — do you personally see value in the Platinum-only features described above? If there’s one take-away that you can get out of this ClickFunnels Platinum Review, then it is this — if you’re a complete beginner and new to sales funnel building, then you probably shouldn’t jump right into getting a platinum account and start with the basics first. As you gain experience, or if you already know how to build a sales funnel, then you can move on to getting a Platinum account to expand your knowledge and skills.

In my humble opinion, ClickFunnels Platinum is the better deal for anyone looking to master sales funnel building and effective web marketing in general. FunnelFlix and access to an exclusive Funnel Hackers Forum more than justify the cost of signing up for a ClickFunnels Platinum account.

Do you still think that ClickFunnels is way too expensive?

Well, how about a 15 percent discount plus access to additional training?

Well, that’s exactly what you’ll be getting if you sign up for Funnel Builder Secrets.

For only $249.75 per month (instead of $297 a month), you get access to ClickFunnels Platinum and masterclass training that will help you make the most out of everything that the marketing platform has to offer.